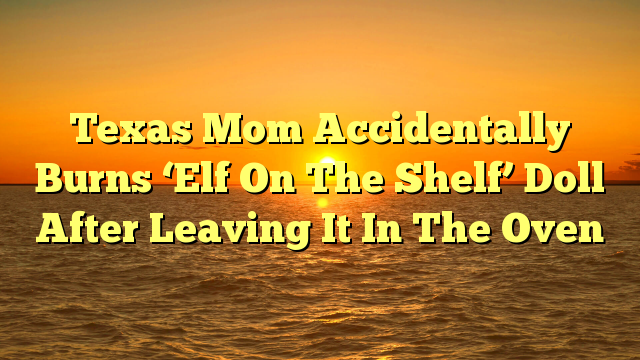 Parents aren’t simply accountable for looking after their kids and keeping them safe. Moms and daddies are likewise entrusted with keeping the “magic” alive for their kids, specifically throughout the Christmas season.

Obviously, this includes maintaining the impression of Santa, and, more just recently, the “elf on the shelf” custom. Some moms and dads have a great deal of enjoyable hiding Santa’s little guard dog. Others, like this mom, honestly see it as an annoyance however do it anyhow for their kids’s advantage. Though Brittany Mease from Wylie, Texas, undoubtedly cannot stand the entire custom, she dutifully conceals her household’s fairy every year. But this December, something went extremely, extremely incorrect when she forgot where she left the doll. Read her funny story of how she “killed” the fairy as she informs it listed below.

“Elfis, our elf that we’ve had for 5 years, arrived on December 1st with a broken leg and blamed it on the kids for leaving their toys out, saying he tripped and broke his leg but Doc McStuffins fixed him up and put a cast on him. The note told the kids that he was on strict bedrest orders and couldn’t move for 14 days.”

“The other day the kids noticed that it had been longer than 14 days and he hadn’t moved so when they weren’t looking I grabbed him off the kitchen counter and quickly tossed him in the oven until I could move him later and not raise any suspicion.”Then she immediately ignored where she ‘d stashed him.

“Today the kids wanted leftover pasta for lunch and Gray likes it when I bake leftover pasta because he says it tastes better so that’s exactly what I did. I preheated the oven and started cleaning the kitchen. About 4 minutes later I started to smell something REALLY funky and that’s when all hell broke loose and I broke my son’s heart.”